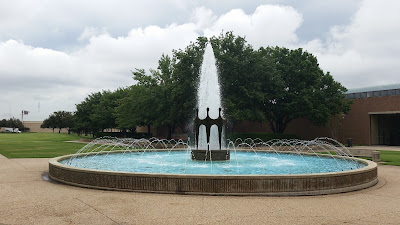 Election day is Saturday, May 6, 2017. Early voting is underway. I attended multiple candidate forums for Richardson City Council so you didn't have to (you're welcome).
I also read the candidates' S.M.A.R.T. Goals.

Based on all of that, this is how I decided to fill out my own ballot.

Cory Montfort is a counselor specializing in relationship therapy. That's probably a skill that more elected officials ought to have. She likes Richardson's parks and recreation, and wants to see more transparency. Although Montfort expresses reservations about more apartment construction, she is in favor of developments that offer "walkability." She's open to discussing whether to change Richardson to a system of single-member districts. Discussion is always good, but I would be against this change. Montfort is enthusiastic about the city regulating payday lenders. I dislike their business practices, but I don't want the city trying to do what I consider to be a state or federal responsibility. All in all, Montfort would probably give the city council a refreshing alternative voice and would probably grow into the job. But she has a big drawback. She's been a resident in the city for less than two years. Her answers to questions suggest her knowledge of Richardson is thin. Although I'd love to see her involved in city government, starting at the top so soon is too big a step.

Mabel Simpson, on the other hand, has a long history of service to Richardson (including being a past board member for The Counseling Place). Simpson is well versed on the issues facing Richardson. She does have libertarian tendencies that tend to take an expansive view of developers' rights over the general welfare. Still, she is a practicing real estate attorney. That's an expertise that could save the city from blundering into costly legal thickets. I'd have an easier time adding Montfort to the council if it didn't mean losing a real estate attorney. (On the downside, Simpson didn't respond to The Wheel's questionnaire.)

This recommendation is not as easy as it should be, but I still recommend a vote to re-elect Mabel Simpson.

Kashif Riaz is an out-of-the-box thinker. He wants to explore capturing energy from Richardson traffic and putting it to use to reduce our energy demands. He wants to explore painting our crosswalks different colors to make Richardson instantly identifiable to people driving our streets. He wants to add fountains and benches to make our city more attractive for tourism. But beyond those innovative ideas, he has demonstrated little expertise in the issues facing Richardson. (On top of that, he didn't respond to The Wheel's questionnaire.)

Marta Gómez Frey, on the other hand, has a long history of service to Richardson. She calls herself (and others have called her) a serial volunteer. She is familiar with the issues facing Richardson. She wants to promote multicultural inclusiveness. She wants to balance the amount of time and resources applied to development, redevelopment and infrastructure. Frey might not be a counterforce to the tendency towards groupthink on the council, but Riaz didn't show me that he would be, either.

This recommendation is easy. Re-elect Marta Gómez Frey. [Update: Frey cannot be "re-elected" as she wasn't elected in 2015. She was appointed to fill an open seat.]

Jared Weadon's anti-growth attitude differs from policies long promoted at The Wheel. It's not a question "if" increased density is in our future. It's a question of how we accommodate that increased density. Maybe Weadon would end up pushing developers to get the best possible growth for Richardson, but the positions he's taking in this campaign could instead lead him to be a reflexive "no" vote on any development project that comes before council if it includes an apartment component. If you want to resist apartments, he's your man. If you want managed growth, as I do, he might not be.

Paul Voelker has the experience (incumbent mayor), the contacts (Richardson Chamber of Commerce and regional boards and commissions), and the priorities (full adoption of the Texas Comptrollers "Transparency Stars" program) to serve the interests of the residents of Richardson with transparency. Voelker, like Simpson, has libertarian tendencies, but is not willing to give developers carte blanche. I've been less than happy with what's happened at CityLine and Palisades, but it could have been worse with a different mayor.

This recommendation is easiest of all. Elect Paul Voelker.