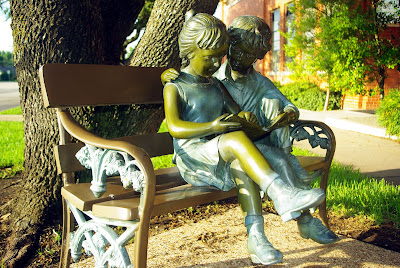 Yesterday, I recommended a vote for Kristin Kuhne over Lynn Davenport for Richardson ISD Board of Trustees Place 7. The reason I gave was Kuhne's work with education research non-profit Educate Texas versus Davenport's association with conservative activist Alice Linahan. But judging a candidate by the company she keeps is not fair, unless keeping that company reflects shared attitudes, beliefs, values, and behaviors.

I said Alice Linahan is known for the long list of things she's against. I included gays, Muslims and refugees. Privately, a critic has denied that Davenport is against gays, Muslims or refugees, which I accept. I don't have evidence otherwise. Simply being associated with Linahan isn't proof that Davenport shares all of her views. I apologize to Lynn Davenport for any inference otherwise.

That still leaves a lot in common. Take for example, Davenport's testimony to the state legislature last summer, which Linahan posted on her own Facebook page and called it "outstanding." In that testimony, Davenport complained that school boards use words that "do not resonate" with her. Words like "Global Citizens, TASA Vision, Future-Ready, Global Economy, 21st Century Learner, Human Capital, Global Future, Social-Emotional Learning, Rubrics, Global Workforce, Outcomes, Data-driven, College & Career Ready, Rigor, Blended Learning." If Linahan calling that "outstanding" is not evidence enough of shared attitudes, compare Davenport's list of words to Linahan's own list of bugaboos. There's not just shared beliefs and attitudes here. There's some coordination going on somewhere. There are more things Davenport is against crammed into that short testimony than I can list here. Read it yourself.

But let's focus just on RISD issues that Davenport herself has taken positions on. Davenport opposed integrating ninth graders into Lake Highlands High School. She was a critic of the 2016 RISD Bond, the bond that contained the funds needed to relieve the overcrowding in Lake Highlands and elsewhere. After voters passed that bond, she opposed the plan to use those bonds to build a new elementary school in Lake Highlands. Davenport is a critic of RISD adopting a District of Innovation (DOI) plan, which gives RISD flexibility in some administrative and instructional state requirements. Davenport is a critic of Project-Based-Learning (PBL) and what she calls "experimental pedagogy." Davenport is even a critic of the RISD board of trustees reaching consensus before putting matters to a vote. Let's return to that list of words that don't resonate with Davenport. The word "global" appears four times in Davenport's list. Over 50 languages are spoken by students and their families across RISD as a whole. Businesses within the RISD, which recruit from RISD graduates, are proud of their "long-standing global reputation as a hotbed of technological innovation." So, whether it resonates with Davenport or not, the word global is key to understanding the RISD and the world our children already live in, 17 years into the 21st century. So, expect Davenport to be against things, lots of things, the wrong things, and be proud of it.

So even if we limit ourselves to just looking at RISD issues, there's evidence that Davenport and Linahan share attitudes, beliefs, values and behaviors. Lynn Davenport may be passionate for change, but for the wrong kind of change. Kristin Kuhne, on the other hand, has a proven track record of positive change. For example, Kuhne takes pride in her leadership in ensuring RISD graduates are college and career ready. By the way, "college and career ready" happens to be a term on both Davenport's and Linahan's list of terms they don't like. Re-elect Kristin Kuhne.