The City of Richardson announced that it had approved a mixed-use development in old downtown Richardson. 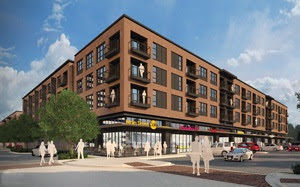 A proposed mixed-use development at the northeast corner of Central Expressway and Main Street was approved unanimously by the City Council Monday. The 14.5-acre development will include residential, commercial and restaurant space. It is the first significant private sector development in the downtown area since the adoption of the Main Street/Central Expressway Form Based Code last year...A highlight of the development is the mixed-use portion planned for the corner of Main and Interurban streets. In addition to 15,000 square feet of retail/commercial space, it will have multifamily units located above the retail space, surrounding private courtyards, and a 700-space parking garage, which will be shared with tenants from the Chase Bank building. Immediately to the north of the mixed-use area will be townhomes with private yards and garage parking. The for-lease units will be two or three stories each and average 1,800 square feet per unit.

After the jump, why I am cautiously optimistic.

This proposed development is advertised as mixed-use. And the highlighted chunk of it does appear to be just that. All too often, Richardson advertises mixed-use developments, but delivers only multi-use. Putting a corporate campus in one corner of CityLine, apartments in the opposite corner, and a strip shopping center along Renner to the south does not make CityLine a mixed-use development. Drive through Eastside sometime. "Eastside is a development with a bank, a convenience store, some offices, restaurants and apartments -- all in the same buildings." That's mixed-use.

So, that's the big feature for me about this proposed development. There is a mixed-use component in one corner. The rest, the townhomes off in another corner, the restaurant along Central Expressway, are same-old, same-old, but that mixed-use building at Main and Interurban has the potential to be a catalyst for other development along Main Street itself.

The mixed-use building is replacing what's mostly parking lot today. That's about as close to greenfield development as you can get in today's built-out Richardson. I hope it doesn't lead to the demolition of the row of small, old stores lining that one block of Main Street today. That would not be greenfield development. There is one building that is set to be demolished that I won't cry any tears for. It's a auto transmission shop that was built in the late 1990s (I think), replacing a shed that was used as a seasonal farmer's market. I mourned the loss of that shed. I regretted seeing its valuable real estate turned over to an car-centric function like an auto transmission shop. I have no regrets seeing the transmission shop give way to a mixed-use residential/commercial building right on the sidewalk of old downtown Richardson. Caveat: I've only read what the folks at city hall have put out and they tend to be development boosters rather than public watchdogs. Maybe there's an unpleasant surprise hidden under this announcement, but, fingers crossed, I'm cautiously optimistic here.
at 6:00 AM