Tomorrow is election day. So, let's give a little space to national politics. Or rather, to Rod Dreher's view of the election campaign. Or rather, to Dreher's postscript to his analysis. It earns him today's award for unintended irony.

You remember Rod Dreher. He was with The Dallas Morning News editorial board. He was the spiritual heir to William Murchison. Both think the world has gone to hell in a hand basket. You could always recognize Dreher's work. He would wring his hands about the downfall of Western Civilization because of gays or Muslims or the disappearance of the Latin Mass.

If you follow Rod Dreher, you know that he has never brooked criticism well. He doesn't hesitate to delete opposing viewpoints from the comments (I call them "opposing viewpoints"; he calls them "trolling"). This year, Rod Dreher has been a consistent #NeverTrump conservative. He's probably tired of getting criticized by both the left and the alt-right. So, he's probably even less tolerant than usual of readers who don't agree with him. This note Dreher added to the end of a post in The American Conservative is typical of Dreher's approach to dialog:


Note to commenters: I’m going to police this thread pretty closely to keep out trolls and bomb-throwers.

Fair enough. It's his website. But immediately following that note, Dreher adds this update:


UPDATE: I have to include this funny pic, which a reader just sent. 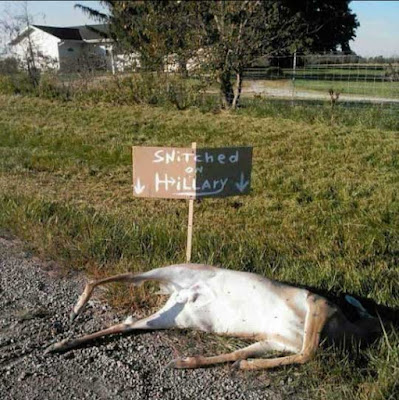 Dreher considers this crude allusion to Hillary Clinton as a murderer to be a "funny pic." So much for Dreher's warning to "trolls and bomb-throwers." Rod Dreher is himself a troll extraordinaire. And that's today's lesson in unintended irony.
at 6:00 AM