Borat Subsequent Moviefilm (2020): Blunt satire of Trump supporters, debutante balls, plastic surgeons, anti-abortion clinics, and, yes, Rudy Giuliani. But vulgarity is no longer shocking, merely vulgar. But then, Giuliani and Trump themselves are vulgar, so call it a draw. D+

In an uncredited, non-speaking cameo appearance, a woman from Dallas appears briefly in one scene. It's newsworthy, if it's who I think it is. Let's just say that the setting, a small "Empowering Conservative Women" seminar in what looks like a business meeting room, complete with a podium flanked by American and Texas flags, would be just the place I'd expect to find a former Texas legislator like Linda Koop (HD102) who is running to regain her seat in Austin. And the look on this woman's face is exactly what I'd imagine Linda Koop would look like if she found herself in a Borat movie. But, like I said, it was an uncredited role, so we'll never know unless she steps forward to take credit. 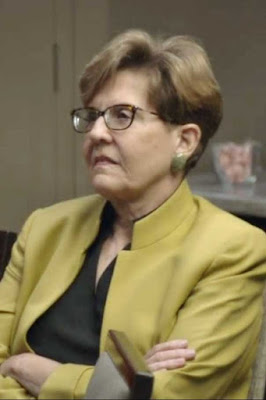