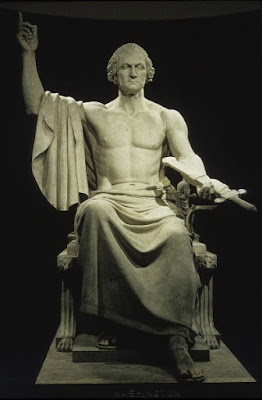 Statues of Confederate heroes* are coming down all over America. So are statues of Christopher Columbus and conquistadors. Not even the slaveholders George Washington and Thomas Jefferson have escaped notice. There are passionate voices on both sides. I have a simple solution that takes the passion out of the equation, now and forever after.

My guess is that if the statues themselves could talk, they would probably agree it's time for them to step aside and let others take their place. Take Jefferson (please). He wouldn't even recognize America today. He said, "Whether we remain in one confederacy, or form into Atlantic and Mississippi confederacies, I believe not very important to the happiness of either part." I suspect Jefferson might be more surprised by than proud of the empire America became. I like to think he'd be embarrassed to look back on his own practice of slavery. If so, he'd at least feel uncomfortable that Americans today worship him like a Roman god in a marble rotunda.

So why do we continue to honor Jefferson, Lee, and Columbus? It's less because these men (and they are almost always men) still have a hold on our hearts. In most cases, people have little knowledge about the flesh and blood men the statues represent. It's more like they admire the statues themselves. Idolatry. Made worse by tribalism. If *your side* wants to take down a statue, then *my side* needs to protect it at all cost.

Here's my simple solution. We ought to recognize that heroism has a shelf life. Rather than wait until a statue starts to smell like spoiled milk, we ought to put expiration dates on statues and replace them when the time comes, hopefully *before* they begin to smell. Make it fifty years, make it a century. Whatever, but put a fixed date on them. At that time, move the hero to a museum to make room for some more recent hero to be recognized, someone Americans still remember and appreciate what it was that makes him or her heroic. The Jefferson Memorial can still stand; just take the statue of the slaveholder out of it and erect a statue of a civil rights icon (instead of relegating Martin Luther King, Jr, to the banks of the Potomac where you have to go way out of your way to see him). The Washington Monument is even more easily handled; a simple renaming to honor a more recent hero is all that's needed. It's not an insult to Washington. In fact, it can even be seen as an honor to George Washington's own decision to step down from the Presidency after two terms. If term limits were good enough for the real George Washington, they should be good enough for his monument, too. A statue of George Washington (see above) can still stand in the nearby Smithsonian Museum so people who want to worship him as a Roman god can still do so, but in a museum context where others can learn about his slaves.

Each time a spot becomes vacant, we could have a national vote to decide which new hero would take its place for the next fifty years. If the voters get it wrong, the voters will only have to live with their mistake during their own lifetimes. Their children and grandchildren will be given the opportunity to honor their own heroes (or make their own mistakes), instead of inheriting the result of their parents' bad judgment, to be lived with forever.