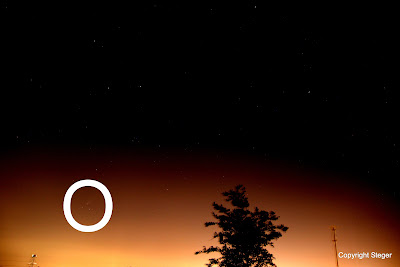 We went out Saturday night to see Comet NEOWISE. According to Space.com, the comet "is delighting skywatchers around the Northern Hemisphere." I'm here to say, "delighting" is an overstatement. At least if you are in a city. Even on a clear night, in a location with no nearby lights, there's enough ambient light pollution to make it hard to do much star-gazing of any kind. Because the comet was low on the horizon, that ambient light pollution is even more of a problem. From Richardson, Plano is kind of bright. And Comet NEOWISE was hanging low over Plano.


Long story short, we didn't see the comet. Disappointing. I did, however, take some photos of the sky, and after getting home and studying them, I did discover that I managed to capture the comet, however faint. It's inside that "O". There are three "stars" in a triangle. Two of them are dots, as expected. But one has the slightest fuzzy tail. You'd certainly miss it if you weren't looking for it. But that's the comet. Here's a close-up to help you spot it. Still disappointing, right? 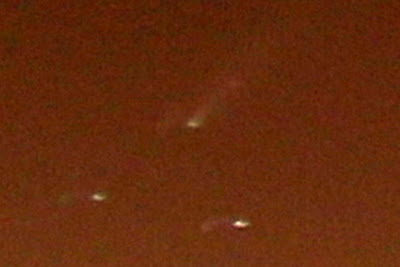 Stars you might be able to see in the top photo without zooming in are the two "pointer stars" of the Big Dipper and the star they are pointing at, the North Star (Polaris). They lie in a straight line, left to right, about two-thirds of the way up in this photo. Don't worry if you can't see them. These are offered as guides in case you want to go out yourself to try to see Comet NEOWISE in the next few nights. With a good pair of binoculars and knowing where to look, you might have better luck than we did. It'll be your last chance before it disappears for 6,800 years. I'm not expecting to be here for its return.

Then I turned my camera elsewhere in the sky, with more interesting results.

Jupiter and Saturn were high in the sky, and they are some of the brightest "stars" in the sky, so they were affected less by light pollution than the comet is. I zoomed in and took a photo of Saturn. When I first saw it, I thought maybe its oblong shape was due to camera shake, but then I noticed the red star nearby that's a sharp dot, so I knew camera shake was not a problem. I was struck by how it looked like I imagine Galileo saw it when he first turned a telescope towards it. He described it as a planet with "handles." Only with better telescopes did Saturn reveal itself to Galileo as a ringed planet. My photo wasn't taken through a telescope, and my zoom lens is probably no more powerful a "telescope" than Galileo's own telescope was. I'm happy with my photo, even if Saturn is flattened compared to Galileo's drawing. I present to you...Saturn with handles. 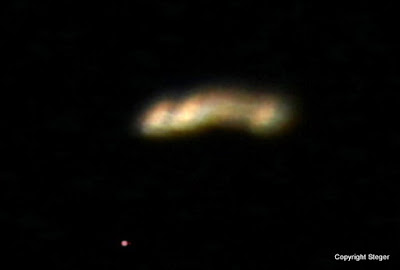