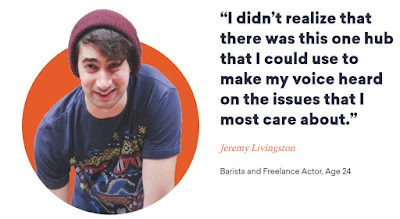 Barista and Freelance Actor, Age 24
"The Association of Young Americans represents you. It’s time we take a seat at the decision table."

The Baby Boomers were young once. They marched in the streets...for an end to the war, for civil rights, for women's rights, for the environment. They're old now and no longer marching (mostly). Sigh. But reportedly, young Americans still exist.

Apparently, they now start lobbying groups for baristas and freelance actors with slogans like, "Fight for your future and save money." You see, when AYA isn't lobbying, it's saving you money. "Because we know that life is expensive for young people, we’ve negotiated exclusive discounts on products and services that might make things a little easier."