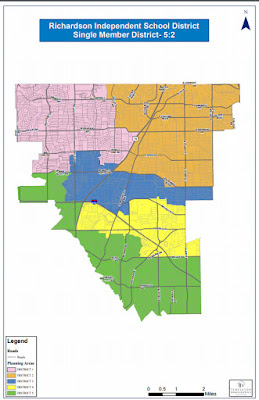 After the jump, my recommendation and prediction for what that system should be.

The court settlement of the voting rights lawsuit provides that five single-member districts and two at-large positions will be phased in as current trustee terms expire. That means three trustees will be elected in 2019, two in 2020, and two in 2021, after which we will have fully transitioned to the new system.

The Texas Education Code gives the board power to set the transition plan. The guiding principles the board is working with include a continuation of RISD's three-year staggered terms, election of the two at-large seats in separate elections, and the timely establishment of so-called opportunity districts (that is, the two districts with the largest minority population).

This doesn't leave a lot left to decide. Board president Justin Bono presented three options for board consideration. The board is of course empowered to adopt something else entirely, but it's almost certain that one of the three options will be adopted. And, of those three options, the first two are essentially the same, differing not in which districts are elected in which years, but in how existing places are mapped to the new districts. Given the announcements that two incumbent trustees won't be running for re-election when their terms expire, and a third probably won't, this mapping exercise won't have a significant impact on which districts trustees end up running for, if they choose to run for re-election.

The third option, which I dismiss, has an at-large seat elected in 2019, along with two single-member districts. I dismiss this because, in my opinion, it's better to have the two at-large seats up for election in years when only one single-member district is also up for election. That way, every third year, when there is no at-large election, 3/5 of the voters will still be involved. Having a year with two single-member districts elected without an at-large seat elected would mean that only 2/5 of the voters would be engaged that year. I value having as many voters as possible engaged every election. I'm confident the board will agree with this reasoning already suggested by Karen Clardy.

Given all that, here is my recommendation and prediction of where we will end up:

None of this is set in stone. The board could still adopt another plan. Trustees' plans could change. And of course the final decision on who sits on the board of trustees is up to the voters. So, prepare for new faces. Even if voters return incumbents to office, it looks like we'll have one open seat each year for the next three.