First Impressions of the Candidates 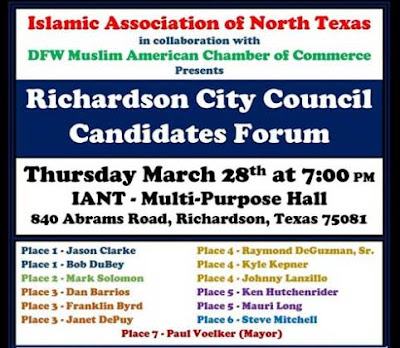 The Islamic Association of North Texas hosted a forum Thursday evening for candidates for Richardson City Council. All candidates in contested races took part. Attendance was excellent. An estimated 300 crowded the multi-purpose hall to hear from the candidates and enjoy a delicious catered dinner. A special shoutout for the samosas. Moving on...

The forum had time for only three questions. One asked the candidates what impact the Muslim community has had on Richardson and on them personally. Another asked what can be done to deal with the rise of Islamophobia. And a third asked, inevitably, about fixing potholes.

The questions were few and the answers necessarily short, so my impressions of the candidates should definitely not be taken as the final word. But, for better or worse, here are my initial impressions.

Bob Dubey (Place 1) had excellent answers for the questions regarding the Islamic community. He pointed out that the Richardson Interfaith Alliance was founded in 2012 with support from then-Mayor Bob Townsend, his predecessor as Place 1 council member. He also said he worked forty years for the Richardson ISD, during which the Muslim community asked for suitable space to be made available in schools for Muslim student private prayer and the district accommodated them.

Jason Clarke (Place 1) offered the best introduction, actually knowing a few more words of Arabic than the usual "As-salam alaykom." On the other hand, he also tried a risky joke (something along the lines of thanking Bob Dubey for wanting everyone to vote for Jason Clarke). Points for trying, maybe. Clarke had the best personal story for this particular forum, saying that he served a summer in Jordan and befriended an Iraqi refugee whom he sponsored for immigration to the USA. He says that when our country has a ban on Muslims, he wants Richardson to be the first to show up to welcome them. To the question about Islamophobia, he asked, What if we loved one another, like me, a follower of Jesus, and you, a follower of Muhammad, love one another? Major props for being openhearted and plainspoken.

Franklin Byrd (Place 3) had the most amusing gaffe of the night. Paraphrasing his introduction, "I'm running for Place 5...what's that? Place 3. Sorry." He said nice things about feeling richer socially and personally because of the Muslim influence on him and his children. He also said he witnessed first hand how Boston reacted to a terrorist attack. As for potholes, he said the city increased funding for street and alley maintenance a few years ago and suggests another increase may have to be made.

Dan Barrios (Place 3) said he grew up and lived elsewhere but said Richardson showed him what diversity is and the value it has. He asked, Are we ready for an Islamophobic attack? and frankly answered no, but we should never give up faith and hope. I think he mentioned his experience volunteering with the Red Cross, but he should emphasize that more, as it's probably his strongest public service experience. One answer struck me as indicating Barrios isn't sure what kind of candidate he wants to be. To the question about potholes he said he can't drive more than 20 mph in his own neighborhood because of the condition of the streets, but quickly added that Richardson has done a great job of street maintenance.

Janet DuPuy (Place 3) had a cute opening, "Say it with me...DePuy" but to be honest I'm not sure it worked with me. I still have to pause before saying "DuPyoo." She has a great résumé, with long-time service with a Richardson HOA and the City Plan Commission. In her answer about the impact the Muslim community has on her, she said something about "every time" she comes through these doors. It's something small, maybe most people missed it, but it struck me as evidence that she doesn't just come to the mosque once every two years when seeking votes. She also said she's a realtor and knows that poor streets are a sign of a deteriorating neighborhood. You can't fault her for reminding voters of her neighborhood involvement. She's possibly the biggest neighborhood champion on the ballot.

Raymond De Guzman, Sr. (Place 4) comes across as a sincere individual wanting to serve the public. He owns a home animal care business. Why he doesn't have photos of puppies on all his campaign material is a mystery. He didn't make a big deal of it in his answers, but he's disabled and hopes to give a voice to that community.

Johnny Lanzillo (Place 4) introduced himself as a lawyer who fights for people's rights. Lawyers are often the butt of jokes so give him credit for not shying away from it. I once endorsed a candidate because she was a lawyer. I wanted someone who knows the law to keep the politicians who don't from doing something stupid. Lanzillo doubled down on his profession in his best answer of the night, especially for this audience, saying that two years ago, when the federal government issued a ban on Muslims coming into this country, it was lawyers who flocked to airports to defend individuals' rights.

Kyle Kepner (Place 4) introduced himself as "a small business owner", conveniently omitting the fact that his business is selling wine, maybe a canny omission on his part, given the setting. He credited the Muslim community with having a large positive impact on this neighborhood, and on his daughter's school. He says the more we get to know each other, the less power phobias have.

Mauri Long (Place 5) staked out a unique position. She wants to represent the majority who make less than $100,000. She wants to make Richardson a community that takes care of people. She says we need all parts of the community, not just the Muslim community, to stand up to Islamophobia. In her weakest answer she said she doesn't have the answer for road surfaces that don't deteriorate but she'll listen and learn. Give her credit for admitting she doesn't have all the answers, but she really ought to have had an answer on this one. Fixing potholes is as predictable a topic at forums like this as anything. On the other hand, none of the candidates had a good answer. Potholes and traffic congestion are due to our cities' form. Cater to automobiles and suburban sprawl and you inevitably end up with an unsustainable street system. City council candidates are always being asked how they intend to relieve traffic congestion. The answers are usually more money and more lanes. I like to throw them a curve ball and ask how they are going to make our roads narrower. Or reduce the number of miles of them we have to maintain. And then watch as they look me over carefully to see if I'm joking. I'm not. OK, I'm at risk of getting distracted here and going down a rabbit hole.

Ken Hutchenrider (Place 5) introduced himself as the President of Richardson Methodist hospital. He began each answer with, "As a professional administrator of a hospital..." In his answer to how the Muslim community impacts him, he said he employs Muslims. His answer to Islamophobia included the claim that his hospital has come very close to solving this problem. I don't know how well this all played with the Muslim audience, but his résumé didn't go over so well with me. I want a City Council that provides independent oversight of big businesses that have an outsize impact and influence on Richardson, not a City Council that literally includes their CEOs in office, adding government power to their already considerable business power. He should focus less on his business résumé and more on what change he wants to bring to Richardson.

These were my takeaways from my evening with the Islamic Association of North Texas. My apologies to candidates whose answers or positions I've mangled, or unsolicited advice I've offered that is not welcome. I'm willing to learn and correct my errors. Just let me know. Now, if you'll excuse me, I have to go find if there are any samosas left.
at 6:00 AM