"In Wildness is the preservation of the world."
Henry David Thoreau 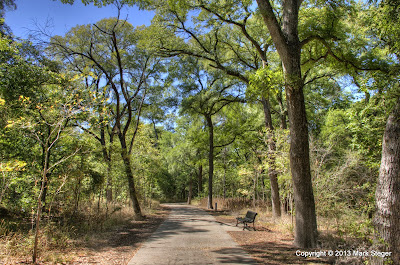 In 1851, when Henry David Thoreau was making his plea for environmental conservation in Concord, Massachusetts, half a continent away in Texas pioneer Jacob Routh was already putting the call into practice. When Routh built his homestead on land that would become present-day Richardson, he set aside some of his woods for preservation in its natural state. Thanks to good stewardship by his descendants and then by the City of Richardson, which eventually acquired the land, that bottomland hardwood forest remains wild today as the Spring Creek Nature Area, the city park that one city council member called "Richardson's Central Park."

When I first started exploring the hike-and-bike trails of the Spring Creek Nature Area in the 1980s, the park did not seem "central" at all. The city seemed far away. The school and church Jacob Routh built to accommodate other settlers were long gone. Even the original Routh homestead was gone, having been burned down by vandals in the 1960s. I never saw a trace of these buildings in my wanderings in the woods, but social trails deep into the woods did lead me to two sacred places: a pioneer cemetery with about one hundred gravestones and a much smaller family cemetery with a handful of graves, including one where Jacob Routh is buried. 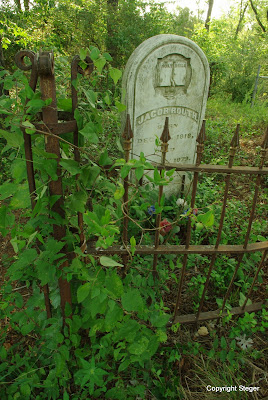 Jacob Routh grave
For most of its winding path through the woods, Spring Creek is contained within steep limestone cliffs, but a wanderer off the trails can still find a cut in the limestone and pick his way through the undergrowth down to the creek. I like to imagine the stagecoaches from McKinney crossing the creek at that spot and resting at the Routh inn on the south bank before continuing on to Dallas. 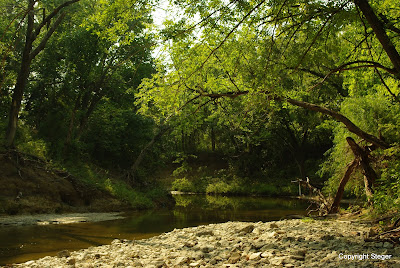 On some of the park's trails, I noticed old overgrown fences that run parallel to the trails. Even though wilderness lies on both sides of the fence, I realized that the far side was private land subject to development. I tried to imagine the future, when new offices and apartments would rise up just beyond those fences. As time went on, I didn't have to imagine.

For me, the first infringement on the wilderness was the DART line that reached Richardson in 2002. Its arrival was bittersweet. As much as I cheered this modern version of the stagecoach, I felt a pang of loss as the disused rail right-of-way through the woods was cleared and widened and new tracks laid. 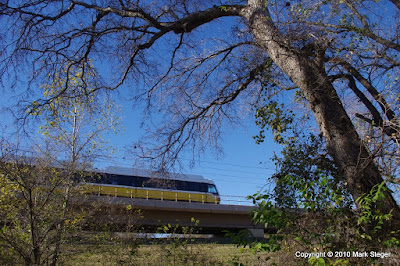 DART line through Spring Creek Nature Area
Today, in the shadow of the bridge that modern DART trains use to cross the creek, you can still find the old concrete support post for the original train trestle. I've sometimes thought it would make a fitting pedestal for a statue of Jacob Routh. Don't clear the undergrowth around it. Just add a statue of Routh in his wildness. 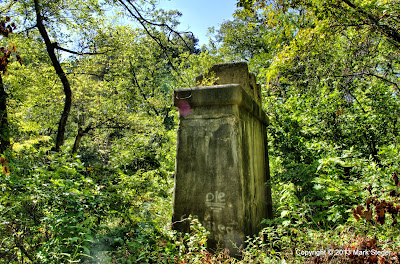 Year after year, I noticed other development coming closer. The office buildings of Galatyn Park marched up from the south and the massive CityLine development marched south. "Richardson's Central Park" was becoming more and more an apt name as the city reached the park's edge. I welcomed the economic growth for Richardson, but worried about the new threats to the wilderness I loved.

In 2010, the bulldozers crossed Glenville Drive and began clearing the woods. I saw it as a gash. The City of Richardson was building Routh Creek Parkway to enhance access to the new office buildings. The private woods around the park that I used to wander freely were disappearing. 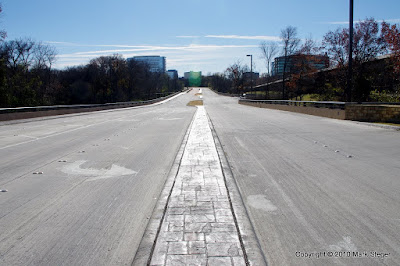 Routh Creek Parkway
Eventually, a developer's bulldozers reached the woods that sheltered the two cemeteries and the site where the Routh homestead had stood. Although the developer committed to preserve the cemeteries, the apartment buildings under construction will be visible from the park trail just across the creek. The new apartment residents' great view is the park lovers' great loss.

The woods to the north of the park were also threatened. Few people realized that the public park occupied only a narrow band along the east-west trail by the creek. The woods to the north, from just off the trail all the way to Renner Road, were still in private hands. That was almost as much land as was protected inside the 51 acres of the park. Ominous "For Sale" signs went up on Renner Road. Then, joyously, in 2014 the City of Richardson announced that it had acquired all that land, as well as smaller parcels on the east and west sides of the park, more than doubling the size of the protected wilderness. Richardson Mayor Paul Voelker said of this action by the City Council, "the end result of preservation will always be my most treasured accomplishment, no matter how long I serve the city." Future generations will forever thank him. 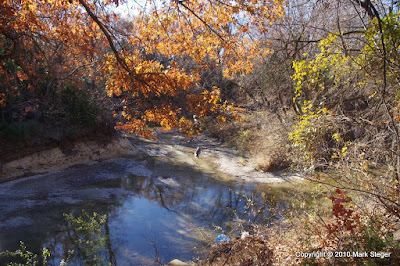 Today, as I stroll the trails, I no longer fear more loss of this wilderness in the heart of the urban environment that Richardson has become. The city is close, but the woods are still extensive enough to keep most of the sights and sounds at bay. Safely within the park's boundary, the woods will stay that way in perpetuity. The trails themselves are shaded by mature hardwood trees. When the leaves fall in autumn, no one rakes them up. When the trees die, the trunks decompose where they fall. New shoots emerge where seeds land. Strolling there in 2018, it's easy to imagine Jacob Routh wandering his land in 1849, watching ducks in the creek or eyeing a coyote loping through the undergrowth. The Spring Creek Nature Area still lives up to Henry David Thoreau's vision and Jacob Routh's desire to preserve his woods. One online reviewer rightly called it "Richardson's most precious hidden gem!"


This article was published in the July-August 2018 edition of Richardson Living magazine.

On behalf of the Routh Cemetery Association, I would like to thank you for your wonderful article. As a group of families related to those buried in the old cemeteries, we strive to preserve these historic locations. We have recently placed a large monument that contains the names of all burials in the large cemetery. There were about 200 known burials there. Our latest goal is to restore the gravestones, some of the oldest in Collin County. We are so thankful to the city of Richardson for preserving this beautifully wooded area as well as their dedication to preserving the old cemeteries.
Joan Keagy
President of Routh Cemetery Association

Joan Keagy, thank you for your note. It is my fervent hope that with mutual attention by the Routh Cemetery Association, the City of Richardson, and the owners of the surrounding land, these cemeteries will be preserved and maintained forever.

Mr. Steger, your article on the Routh Woods really sparked my imagination about all the adventures in local history that must have taken place there, those still to be made today, and in the future. Love your suggestion about a statue of “Jacob Routh in his wilderness “ -such a keen idea too for the pedestal to support this visionary pioneer figure! Thank you for emphasizing the early Texan cemeteries nestled near Spring Creek. The Routh cemeteries’ restoration and preservation are noble goals. Hopefully, by shining a light on their existence, enthusiastic support will grow to honor those who came before us, and built the foundation for the current citizens of Collin County. With your illuminating essay and your readers help, both these aspirations can be achieved!
Patricia Briggs

Patricia Briggs, thank you for your kind words and for picking up on the suggestion for a statue of Jacob Routh in his wilderness. Anywhere else just wouldn't do.

Thanks for writing this interesting article. I spent MANY hours on that bluff by Jacob Routh's Grave. That spot was covered in Purple Coneflower, Square Bud Daisy and other wildflowers. I would watch painted buntings in the trees there. I was sad to watch all of that native prairie disappear. That field was covered in Basketflower. I wrote about my hikes here: https://www.dmagazine.com/frontburner/2011/02/law-man-walking-nature-treks-with-bill-holston-2/

I know it's a balancing act with development and preservation, I was just really sad to see that prairie disappear.

Bill, thanks for the comment. I thought of you when I wrote that article, actually thinking that you would have been a better choice to write it than I was.

not at all. You did it justice. Thanks!