Mapping Racial Diversity in the RISD 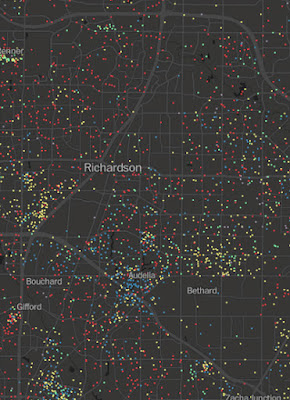 The Washington Post published a tool that allows one to use census data to map changing racial diversity in cities across the country from 1990 to 2016. The graphic here is roughly contiguous with the Richardson ISD boundaries. There are no surprises.

The Hispanic population (yellow) on Spring Valley Rd west of Central grew. The African-American population (blue) in the Audelia-LBJ neighborhood did likewise. The density of both populations exceeds the density of the white population (red) in the surrounding neighborhoods. And the north of RISD (roughly along Campbell Rd from Coit to Jupiter) is largely white.

Readers can do their own interpretations. For me, this map, especially the changes in racial diversity between 1990 and 2016, suggests why most of the recent election controversies (bond elections, school board elections, school overcrowding decisions) seem to have the most heated debates in Lake Highlands. And why throughout RISD the issue of "neighborhood schools" is only going to get more heated. The map isn't going to change. Or, rather, the changes already occurring won't reverse. Somehow we just have to find a way to live with one another.