Today's photo-of-the-day is from the Agra Fort in India. A fort stood on this location for a thousand years, but the current fort dates to the Mughal Empire when Agra was the capital of India. Its most famous occupant was Shah Jahan, who built the nearby Taj Mahal as a tomb for his empress, Mumtaz. This photo of two beautiful Indian women was taken near the marble balcony where it is said that Shah Jahan died, gazing at the Taj Mahal where Mumtaz was buried.

Bonus photo after the jump. 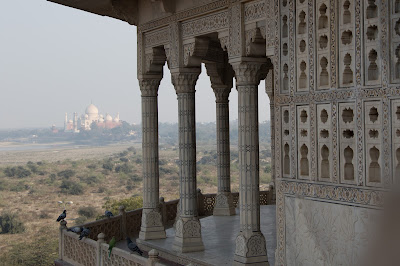 View of the Taj Mahal from the Agra Fort

at 6:00 AM
Email ThisBlogThis!Share to TwitterShare to FacebookShare to Pinterest
Labels: Travel