Time it was and what a time it was, it was
A time of innocence, a time of confidences
Long ago, it must be, I have a photograph
Preserve your memories, they're all that's left you 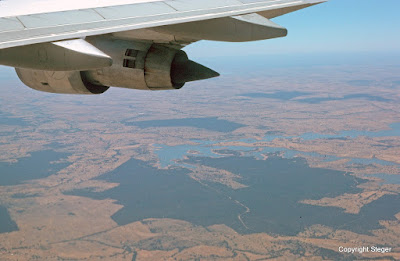 After the jump, a last look at Australia.

Australia is a big country, much of it empty. The best way to see it is by car, but that's also the most physically demanding way. For me in 1977, a flight from Melbourne to Singapore would have to do. From Australia's relatively green southeast (where most of the people live) to the barren interior (where hardly anyone lives). Hour after hour staring from a plane window at a landscape below that subtly shifts, yet never yields. This would be my last look at Australia, at least until I return, as I've always known I will ... someday.

One of a continuing series.
Previous: Around the World in 800 Days
Next: Singapore, My Landfall in Asia
at 7:00 AM

Well, I finally made it back, in March, 2018. I had promised Ellen for decades that I would show her the Melbourne I knew and loved. In 2018 I finally did.