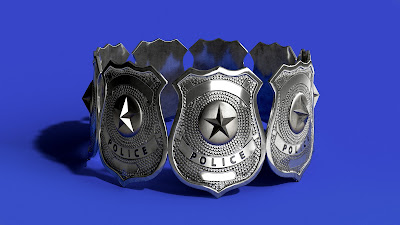 "Man Dies After Medical Incident During Police Interaction." That was the headline of the Minneapolis police department's statement on the day of George Floyd's murder. But thanks to a bystander's eight minutes 46 second video, the public has a much fuller understanding of the "interaction" than is admitted in that police statement.

The City Council of Richardson reacted to the murder of George Floyd by asking Chief Jim Spivey to brief the City Council on the RPD's policy on use of force. I was generally pleased with what I heard. But...you just knew there'd be a but.

But I had a number of concerns. Rather than repeating my old concerns here, I direct you to my review of the briefing here: "Richardson Police Policies". Today I want to focus on a new concern, raised by an Adam Serwer article in "The Atlantic". In my mind, what wasn't covered adequately at that Richardson briefing are the RPD's policies regarding accountability.

Reviewing 82 active police-union contracts in major American cities, a 2017 Reuters investigation found that a majority “call for departments to erase disciplinary records, some after just six months.” Many contracts allow officers to access investigative information about complaints or charges against them before being interrogated, so they can get their stories straight. Some require the officer’s approval before making information regarding misconduct public; others set time limits on when citizens can file complaints.
Source: The Atlantic.

How many of these apply in Richardson? I don't recall Chief Spivey's answers, if anyone asked him at all.

I used to nod my head in agreement whenever an incident of police misconduct, like the George Floyd murder, was met by a fatalistic shrug and an attitude of "there are always a few bad apples in the barrel". But the Reuters investigation above makes me wonder if the problem is more systemic. If rooting out the bad apples is difficult or impossible because of policies that shield misconduct... If reporting misconduct doesn't result in punishment for the misconduct... If violating the unspoken code of silence among police officers results in ostracism for reporting misconduct...then it should be no surprise that a few rotten apples spoil the whole barrel. Or worse...

This is not a system ruined by a few bad apples. This is a system that creates and protects bad apples by design. Most people who become police officers enter the profession because it is held in high esteem and because they wish to provide a public service. But individual good intentions cannot overcome a system intended to render them meaningless. Being a good cop can get you in trouble with your superiors, your fellow officers, and the union that represents you. Being a bad one can get you elected as a union rep.
Source: The Atlantic.

Well, Chief Spivey is gone. It's too late to bring him back to ask him tougher questions about accountability in the RPD. There's a new chief in town, Gary Tittle. It's not too early for the new City Council to think about asking Chief Tittle to brief the council on RPD policies that might be making misconduct hard to uncover and discipline. Don't ask him if RPD tolerates misconduct. Ask him if RPD has the kind of policies that would make it difficult for him even to know the answer.