Best Romantic Movies of All Time* 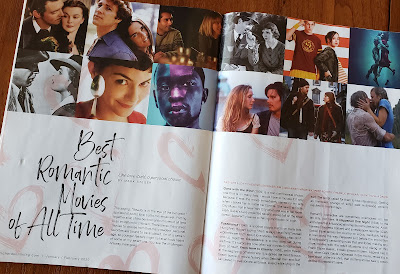 This article was originally published in "Richardson Living" magazine. Read it on that website or in the print edition. Or read it here.

The saying, "Beauty is in the eye of the beholder," applies not just to love, but to movies as well. Putting together a list of the best romantic movies of all time is an invitation for criticism. There are so many great movies to choose from that many readers' personal favorites are bound to be snubbed. I'm of a certain age, so younger readers might not even have heard of some of my selections. You see the challenges. Anyway, here goes.

Spoiler alert: the discussion below gives away important plot points. Frankly, my dear, I don't give a damn.

"Gone with the Wind" (1939) is a non-controversial choice, one that is on many lists. I would have to include it if only because it was the movie immediately named by my wife when I asked her to name her favorite. She saw it at Radio City Music Hall in New York City when she was in her teens. Clark Gable's face projected several stories tall on the silver screen apparently leaves a lifelong impression on a girl.

"Casablanca" (1942) is another classic that is on many lists. Humphrey Bogart saying "We'll always have Paris" reveals a bittersweet truth about love stories: the lovers often don't end up together. "Casablanca" is a love story set during wartime. It's surprising how often war movies contain a love story at heart.

"From Here to Eternity" (1953), set in Hawaii at the beginning of World War II, supplied the most famous beach scene in movie history when Deborah Kerr and Burt Lancaster, in passionate embrace, kissed while lying in the surf. The script called for them to kiss standing up. Getting an immodest change of script past Hollywood censors resulted in movie magic.

Romantic comedies are sometimes overlooked on top ten lists. Not here. "It Happened One Night" (1934) is the archetype that influenced all romantic comedies since. A rich heiress (Claudette Colbert) and a newspaper reporter (Clark Gable) travel across the country on a bus, inevitably falling in love along the way. Released just before the imposition of Hollywood's censorship rules that prohibited making any more movies with the adult situations and dialog of this Frank Capra classic, it feels almost modern. Legend has it that when Clark Gable undressed in the movie, revealing a bare chest under his shirt, that clothing stores saw a steep decline in undershirt sales.

"When Harry Met Sally" (1989) owes a little to "It Happened One Night." Billy Crystal and Meg Ryan share, not a bus ride, but a long car ride from Chicago to New York, eventually falling in love.

But my favorite romantic movie (not a comedy) with a similar premise is "Before Sunrise" (1995), which tells the story of two strangers who meet on a train ride to Vienna. Their different travel schedules mean they have only one night together in Vienna. It involves endless walking and talking, like the night itself will never end. But of course it does. That was me, kinda, long ago. Sigh.

"Love Story" (1970) has to be included because it has a title that screams, well, love story. It was the biggest box office hit of 1970, so lots of Kleenex was used in theaters that year. I saw it on a date when I was nineteen years old. It's not a coincidence that the romantic movies you remember most are the ones released when you are dating. Sometimes just the memory of where you originally saw a movie, and with whom, triggers fond memories. Unfortunately, "Love Story" didn't age well. It taught a whole generation of young Americans that "Love means never having to say you're sorry." It turns out, that's not true. Who knew?

Then there are the unconventional romantic movies. I love the odd, unpredictable, idiosyncratic movies. These are the movies that surprised me, each in its own way.

"Amélie" (2001) is a quirky French comedy. The main character is a charming young woman, exceedingly cute. In search of romance, she engages in mischief to brighten the lives of others. How Amélie finds love is almost beside the point. The audience falls in love with Amélie herself.

"Juno" (2007) does things all backwards. Instead of first falling in love, then having babies, Juno finds herself pregnant at sixteen and not (yet) in love. It's a coming-of-age tale that shows life isn't always like a fairy tale romance. Ellen Page is delightful.

"Once" (2007) is a realistic take on the movie musical. It features a struggling musician in Dublin and the Czech immigrant he meets who helps him put together a demo disc of his music. Their growing love is told in that music. It's quiet, understated, and touching.

"The Big Sick" (2017) is a hospital romantic comedy. It's a love story where being in a coma doesn't end the romance, it makes it stronger. It's all the better for being loosely based on a real life story from Kumail Nanjiani's own marriage.

"Moonlight" (2016) is a raw story that classic Hollywood never could have told. It's a coming-of-age tale showing the emotional and physical abuse suffered by a boy growing up gay in Miami. But is it a love story? How can love bloom when people are made to feel ashamed of their sexual orientation? It's a heartbreaking love story.

If "Moonlight" is an unconventional love story, "The Shape of Water" (2017) is off-the-charts crazy. It includes what just might be the film industry's first inter-species sex scene ever. We've come a long way since the censorship rules of the Hays Code. Like "It Happened One Night" in 1934, "The Shape of Water" and "Moonlight" each won the Oscar for Best Picture. Oscar likes movies that challenge convention, and so do I.

Finally, there's "The Notebook" (2004), a sad tale of summer romance and missed opportunity. I have to confess I haven't seen it (yet), but I include it here because it was the example used by the publisher of "Richardson Living" when she offered me this writing assignment. Because it was the first movie she thought of, and I respect her opinion, I'm sure it belongs on this list. I'll be streaming "The Notebook" soon. Promise.

I hope this list includes at least one movie you'll be putting on your own streaming list. Even if not, new romantic movies are always being made. If Hollywood keeps making them, we'll keep watching them.