"What does it profit a man to change the trade deficit with China a little but allow human rights in Hong Kong to be strangled?" — Rep. Colin Allred 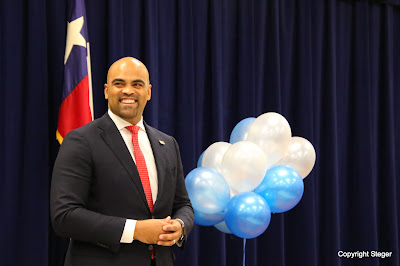 Representative Colin Allred (TX 32) held a townhall meeting at Yale Elementary School in Richardson Saturday morning, sponsored by Richardson Area Democrats. The crowd and the mood were decidedly different from former representative Pete Sessions' 2017 townhall meeting at Richardson High School. Then, an overflow crowd of about 1900 people dissented from most of Sessions' position. In contrast, the much smaller crowd of about 100 people Saturday gave Allred a warm welcome and greeted his answers to questions with polite applause and sounds of approval. 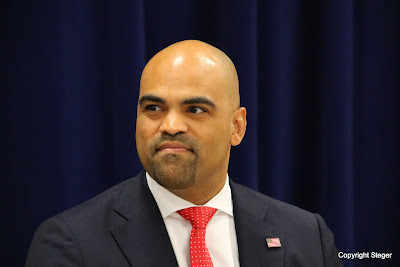 He opened by eliciting laughs by regretting coming to Richardson when not much was happening in Washington, DC. He quickly turned serious, saying he went to Washington with a goal of focusing on shared values, not partisan issues, but "recent events have forced my hand." He said his oath of office was to the Constitution and he cannot overlook violations of the Constitution. He vowed to consider impeachment seriously and in a deliberate manner. He knows impeachment is controversial, but he said if his actions end up hurting his chances for re-election, so be it.

Allred gave examples of the issues he has concentrated on in his first nine months in office. He mentioned a bipartisan effort to convert a closed hospital in Garland into a Veterans Administration healthcare facility. He said Texas has the highest uninsured rate in the country and he is working to expand insurance coverage, not contract it. He said the Democrats have just introduced a bill to bring drug prices down, in part by allowing Medicare to negotiate drug prices with pharmaceutical companies. He said President Trump has voiced support of bipartisan efforts in Congress to address prescription drug prices but so far the Senate does not show interest in taking up the issue.

Allred said a big issue facing America today is inequality and the lack of social mobility. He said it's getting harder to chase the American dream.

Allred said youth tell him their biggest issues are gun violence and climate change. He said the House has passed a bill expanding background checks for gun purchases. He also favors closing the so-called "boyfriend loophole" that allows domestic abusers with prior convictions to legally possess firearms.

A common refrain in many of Allred's status reports on issues is that the House is passing legislation that the Senate refuses to take up.

He then took questions submitted by the audience. He had time for four, dealing with election security, hate crimes on LGBTQ, the Green New Deal, and growing ethnic conflict throughout the world.

He asked, what is democracy without legitimate elections? "This is the whole ballgame." He is afraid the President might be using the power of American foreign policy to influence domestic elections. He is afraid that foreign powers will hack future American elections, referencing the Mueller report that said three Florida counties had election equipment hacked in 2016. On voting rights, he called for universal voter registration and said everyone should be able to cast their ballot with as little interference as possible from both their state and foreign governments.

He said he was a co-sponsor of the Equality Act that was passed by the House that extends civil rights to LGBTQ persons. Again, the bill is held up by the Senate. He reminded the audience that it's legal in Texas for you to get married on Saturday and fired on Monday because of who you marry.

He was asked why he didn't sign on to the Green New Deal. He pointed out that the New Green Deal is not legislation, but an outline of a framework of an ambitious plan. He said he supports specific bills that are consistent with the plan. He supported the House-approved bill to require the Trump administration to remain a party to the Paris Climate Agreement. Again, the Senate has refused to act on the bill. He pointed out that Texas leads the nation in green energy development and supports efforts to reduce the cost of renewable energy, seeking market-based solutions before mandates. He supports high-speed rail between Dallas and Houston.

He was asked about ethnic violence, specifically in Kashmir and Egypt, and violence against the Rohingya people in Myanmar, and democracy demonstrations in Hong Kong. Allred said President Trump has abandoned America's traditional support of human rights around the world. He warned that anti-democratic impulses are expanding around the world, encouraged by acts like President Trump promising China's President Xi not to raise Hong Kong protests as an issue if China cooperated with Trump on trade. Allred asked, "What does it profit a man to change the trade deficit with China a little but allow human rights in Hong Kong to be strangled?"

Allred said he doesn't believe there's a military solution in Afghanistan, but he disagrees with Trump's willingness to cut a deal with the Taliban in exchange for an American military pullout, an eagerness that extended to Trump inviting the Taliban to Camp David to sign a deal. Allred objects to leaving Afghan women at the mercy of the Taliban. He said that wherever you see a respect for women's rights, wherever women share power, there you also see a reduction in violence.

Allred covered a lot of ground in an hour. He had the audience with him. Not a raucous audience by any means, but an audience that demonstrated a feeling of satisfaction of having a representative who shared their values. Maybe he didn't win over any Trump supporters (there were at least three in the back of the room and a few others outside) but he didn't go out of his way to provoke them and insult them, either. That's progress, I think? 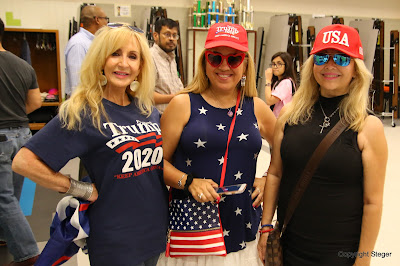