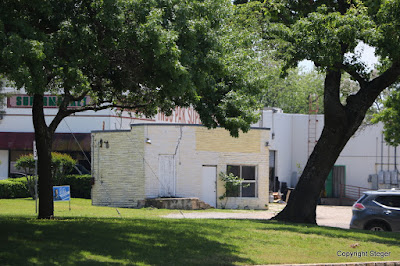 Many residents of Richardson may not even be aware of the Ice House. I've lived in Richardson since 1984 and this little white building on the south side of Main Street just east of Greenville Ave. has only been like something in my peripheral vision all of that time. It's been standing vacant for as long as I can remember. But I was at least aware of it. I even knew it as "the ice house." As years went by, the most remarkable thing to me was that the ice house was still standing — vacant, ignored, overlooked by time and development, but still standing. If rumors are true, that's all about to change. So, I did a little research. Just a little, but enough to cement its place in my heart.

It turns out that it's properly called the Morris Ice House. It was built in 1940 by Ray Morris, who ran the ice house with his wife Christine until his death in about 1967. They served not only block ice, but crushed ice and various iced treats, cold drinks, and other convenience goods. Ray Morris and his wife lived in a house on the back of the lot. The house is long gone, but the ice house stubbornly remains. It's had other uses. One story is of a TV repair shop there sometime in the early 1970s. But never anything long enough to displace its name as "the ice house." The building remained in the family until 2016, when the wife of Ray's son Bill sold it. Ray's nephew Jimmie is a life-long Richardson resident and offered much of the information here, including the old family photos. 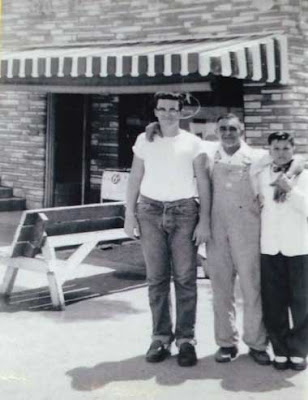 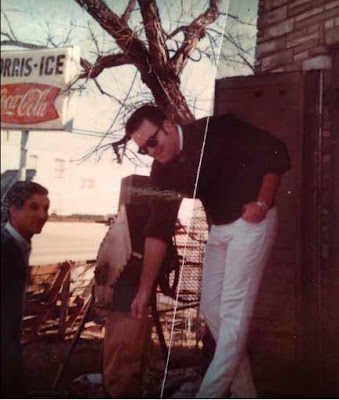 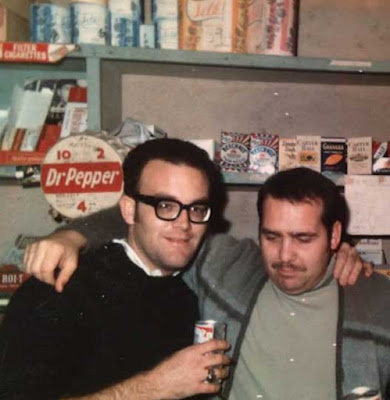 Allen and Bill inside the ice house

The rumor now is that the ice house will need to go to accommodate the City of Richardson's plans for redevelopment of Main Street, which include realignment and widening of Main Street. The commercial building on the northwest corner of Main Street and Greenville Ave. has already been demolished by the City for that purpose.

Regardless whether the City takes it or the current property owner demolishes it on his own, I fear that the ice house is not long for this world. But is demolition inevitable? Is there another way to save this little bit of Richardson history? I don't know about anyone else, but I've always had a soft spot in my heart for the ice house, even if its heyday preceded my own migration to Richardson. Which got me to thinking. Always dangerous, I know.

You know that now vacant lot on the northwest corner of Main Street and Greenville Ave? The one the City plans to turn into a little park? Wouldn't it be a dandy place to preserve a little bit of Richardson history by showcasing the little ice house? Don't demolish it, even if you need the space it sits on. Just move it across the street. Call it art or call it history. Think of it like the little John Neely Bryan cabin in downtown Dallas (which itself is only a replica — the ice house is original). Or think of it as an artistic counterpoint to the planned sculpture at the new Public Safety Campus, a 28-foot-tall "silver, patterned metal sculpture with intermeshed layers" forming "a tubular, vertical 'Texas star' " that will be "lit with red and blue lights from within at night, representing fire and police." Can't there be anything to remember the "old" in old downtown Richardson? Just one thing at least that respects our past? No matter what happens to the rest of Main Street, it would be reassuring to know that the old ice house might be preserved forever.

There's one more detail in its history that makes it fitting to preserve the ice house's location near the new fire department. Like I said above, the ice house is better called the Morris Ice House, after its builder, Ray Morris. Ray Morris was Chief of Richardson's Volunteer Fire Department in the years that the ice house was built. 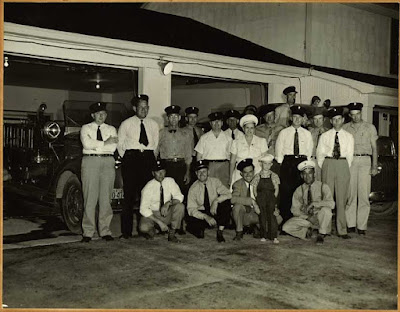 Sure it's just a little old building without architectural significance. But it's a still-living reminder of our past. It's one of the few old buildings we have. And with the City's grand vision for remaking old downtown, who knows if anything else from that era will remain in ten or twenty years? So let's save the ice house. Do it for Chief Ray. Do it for Richardson. Do it so the future has something left to remember the past.

Allen Morris was my attorney for years. We spoke of it. A few times. He didn’t really have any plans for it but wasn’t really looking to part with it either. When we spoke of it in the early 2000’s he has said he had many offers in the past but always declined. He was a real nice guy and a good attorney.

I have noticed in the past weeks that the restaurant next door now has been using it. Appears to be for storage if I had to guess.

Krista_RN, thanks for your recollection of conversations with Allen Morris.

I’ve always loved that building too! I’m so sad the way Richardson is so focused on building new (which that part of town definitely needs) but doesn’t seem interested in preserving our past. We have a great history that should be preserved.

Cindy B, thanks for the support. By the way, I just noticed that on Google Maps, the Morris Ice House is labeled "Rinky Dinky Building." How's that for lack of respect?

What a nice article!

Commenters, please check the box "Share my profile" on the form for "Edit my profile" in order to make yourselves known.

Arguments against saving the Ice House:

1. It's a distraction from saving the other aging buildings on Main Street.
Why not save them all, including the ice house?

2. Save Miss Belle's house instead.
Why not save them both?

3. It "CAN NOT" be saved because it's on a concrete foundation and has no internal structure.
Let's not judge whether it's worth the cost until we first get some experts in such work to do an appraisal.

4. Who would pay to move it?
Let's find out how much it would cost first.

5. It's an eyesore. It has no historic value.
I guess that is in the eye of the beholder.

I am sickened at the destroy, destroy aspects of this " modern" planned development that is destroying the historic downtown structures. Please save this building. Planning to go eat again at Dells before the destruction gets that, too.

I am sickened at the destroy, destroy aspects of this " modern" planned development that is destroying the historic downtown structures. Please save this building. Planning to go eat again at Dells before the destruction gets that, too.