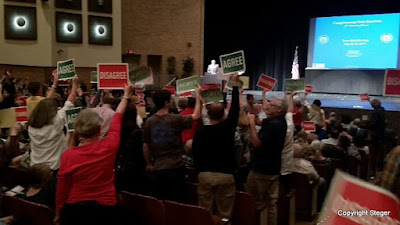 Representative Pete Sessions (TX 32) held a townhall meeting at Richardson High School Saturday afternoon. It was a full house. The mood was decidedly different from his townhall meetings of 2009 and 2010.

In 2009, the mood was decidedly Tea Party. Attendees ranged from the young man with a "John Galt" name tag to an old man marching down the center aisle with a sign reading, "Euthanize Obama 'Care' Not Our Seniors". The earnest woman at the microphone who said, "I don't have health insurance" was met with a shout from the audience, "Get a job."

In 2010, it was Pete Sessions himself who provided most of the Tea Party positions. His take on the Affordable Care Act was that "the legislation was designed to inflict as much damage as needed to kill the free enterprise system," and "America's days as a superpower are over." Sessions's opposition to ACA was greeted with cheers. 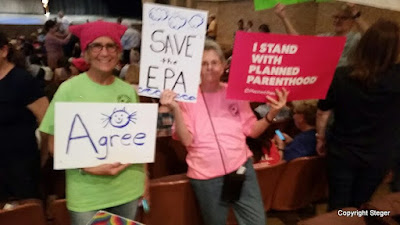 The mood change was obvious from Sessions' opening statement, in which he blamed the $1.4 trillion federal budget deficit in 2009, not on the economic collapse that occurred on Republican George W. Bush's watch, but on the future 2010 Affordable Care Act. Hoots and hollers rained down on him.

Sessions warned that the logic of the Affordable Care Act would lead to a single payer system. I'm not sure if Sessions expected the audience to shiver with fear at the possibility but the crowd instead erupted in cheers.

It only got worse for Sessions from there.

Sessions soon turned the podium over to the mayor of Rowlett to read questions submitted online and from the audience. Occasionally when crowd noise drowned out Sessions's answers, the mayor asked for quiet. Once, the mayor pleaded with the crowd, "We are trying to get your questions answered," to which someone shouted, "So are we." Another time, he said "we all came to hear what the Congressman has to say," to which someone answered, "We came so the Congressman can hear what we have to say."

Sessions said Trumpcare would let everyone keep Obamacare for the next two years. You know how that was greeted. Tone deaf, he also said he wouldn't wish Congress's own health insurance on anyone. Later, he boldly stated, "We are going to pass the bill and repeal Obamacare." The crowd responded with a chant, "Vote him out!"

Someone demanded that Congress insist that Trump release his tax returns. Sessions replied that by law the President and Vice President's taxes are audited every year, conveniently ignoring the fact that such audits don't result in a release of the returns and don't give the public any insight into what ties Trump might have with Russia.

Asked if the public can count on Sessions to support Planned Parenthood, he dodged, saying, without details, that the GOP budget increases funding for women's health care.

Asked about "the Wall", he gave the crowd half of what they wanted to hear, saying that a wall is unnecessary in the Big Bend. Asked how we will fund the wall, Sessions dodged by saying something about the wall being necessary to stop drug cartels. I'll mention here that sometimes the crowd erupted with chants of "Answer the question," which Sessions patiently waited to die down before moving on to the next question.

Asked about the EPA, he also gave the crowd half of what they wanted. He said he didn't believe Congress would accept drastic cuts to the EPA budget, but then added that he believed the EPA should quit issuing rules and regulations. Huh? That's what EPA's job is. Those rules and regulations specify the details necessary to implement and enforce legislation enacted by Congress.

Asked about anti-Semitism and Islamophobia, Sessions gave an answer about immigration. He didn't seem to to understand that the Jews and Muslims who are being targeted are *Americans*.

Asked about cuts to government research and development, Sessions claimed that "we are doubling funding at NIH." How that squares with reports that Trump's budget cuts NIH's funding by $5.8 billion wasn't addressed. To another question that asked about budget cuts to R&D, the arts, PBS, Meals on Wheels, etc. Sessions answered again that NIH's budget will be doubled, which led to a chant of "PBS. PBS. PBS." I looked at one of the cameramen in the rear of the auditorium, and mouthed "PBS?" to him, to which he replied with a thumbs-up.

Asked whether he would pledge to work for the $7.25 federal minimum wage, Sessions responded by saying Congress hasn't had a raise in ten years. Again, tone deaf. You can guess how the audience took that.

He claimed he is not in favor of cutting Social Security or Medicare and, in fact, he doesn't know anyone who has proposed doing so. I guess it all depends on how you define "cut." Maybe Sessions doesn't consider raising the retirement age or redefining cost of living adjustments as "cuts", even though they will result in seniors getting smaller checks than would result without the changes.

Sessions said he supports high speed rail for Texas, one of his few statements the crowd uniformly supported. He didn't say why. Maybe because it means money for Texas. Maybe because he expects it to be built with private dollars. Who knows?

He predicted six million net new jobs in the US this year. That's an average of 500 thousand a month. That's a breathtaking prediction, given that we have just had 75 consecutive months of job growth, none of which saw even 400 thousand jobs in any one month. Not even Trump has been as bold.

He claimed that unless you were guilty of some "felony-type offense," you would not be deported. He didn't define terms. But he did flatly state that "Sanctuary cities will be defunded."

Sessions was asked what he will do about "Trump's incessant lying." I'm sorry I didn't get his response, as it was drowned out by the crowd's hooting and hollering.

Perhaps in a Freudian slip, he admitted that "we will err on the side of giving the military more money." The "we will err" part of that sentence maybe said more than Sessions intended it to.

Sessions instructed one questioner to "Call my office," to which someone in the audience yelled, "Answer your phone!"

Sessions said he does not support the "legalization of any part of marijuana." (Yeah, I know, I wondered if that meant leaves, buds, stems, etc, or something else entirely.)

Asked about school vouchers, Sessions said that parents with children with disabilities should have the opportunity to change schools. He went on to clarify that it has to be a disability "not that you made up, but that you can see." Huh? The fact that Sessions himself has a child with a disability makes me think that Sessions might have a little more empathy for poor people if he were poor himself.

The final question was "If we can fund $1.6 trillion for wars in Afghanistan and Iraq, why can't we fund health care for all?" The audience chanted, again, "Vote him out!" And with that, Pete Sessions was gone. He didn't give an inch. Neither did his constituents.