Punching Through Central at Palisades 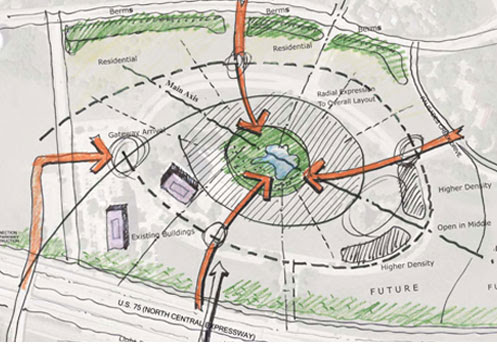 There's a glimmer of hope for my quixotic dream of punching through Central Expressway to help end the divide between east and west Richardson. Does the name Palisades ring a bell? It's the office park on the west side of US 75 across from Galatyn Park. I use the term office park loosely, as it's mostly vacant land with one big office tower (perhaps the tallest in Richardson, but who's measuring?), another smaller office building and an ugly parking garage facing Central Expressway. Otherwise, there's a lot of grass. And streets that go around and around but end up nowhere.

I don't know the history of that property. It was laid out as if some developer had big plans that never came to fruition. After the jump, is the time right for an even bigger and better plan?


The city of Richardson laid the groundwork for development by extending the Galatyn overpass west and down into the Palisades area. That investment, which once looked like a bridge to nowhere, now appears to become a connection from Galatyn Park to a major new development for Richardson. Check out Palisades Village. Features under consideration include:

My only comment - how come the reality never lives up to the architectural renderings? Wouldn't it be nice if at least once in a while the reality surpassed the 'vision?'

Gary, I think there are two reasons why reality falls short of the vision. One, the developers have to promise the world to win support, even if it isn't economically feasible. Two, the neighbors don't want the world. They want a moat between themselves and the world. In this case, of the two reasons, I fear number two more than number one.