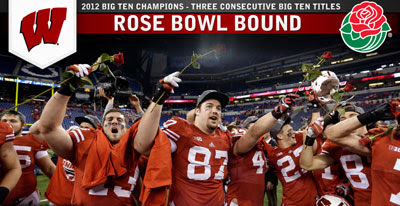 Everything's coming up roses. The Wisconsin Badgers defeated the Nebraska Cornhuskers 70-31 Saturday night in the Big Ten Championship game to earn their third consecutive trip to the Rose Bowl, the "Granddaddy of them all," where they'll face the Stanford Cardinal on January 1, 2013. It was reported that Bucky Badger was on suicide watch during the game, the football team torturing him, forcing him to do so many push-ups. Go Badgers, the best 8-5 team in the country! ;-)

Look back on last year's Rose Parade and Rose Bowl game.
at 7:00 AM
Email ThisBlogThis!Share to TwitterShare to FacebookShare to Pinterest
Labels: Sports