When Four Stars Are Good Enough 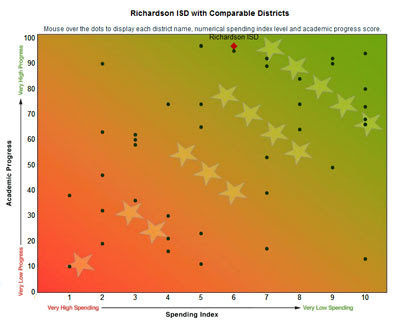 The 2011 update of the Texas Comptroller's Financial Allocation Study for Texas (FAST) was recently released. According to the FAST website, "Each district and campus is assigned a FAST rating of one to five stars, indicating its success in combining cost-effective spending with the achievement of measurable student academic progress. Five stars reflects the strongest relative progress combined with the lowest relative spending."

Some of the nearby school districts that earned five stars are Allen, Coppell, Garland, Irving, Mesquite and Wylie. Congratulations to all of them.

Where did the Richardson ISD land on this rating scale? That little red square at the top of the graph above is the RISD. Scattered around the rest of the graph are 40 fiscal peers. Richardson's position earns it four stars out of five.

After the jump, what the RISD would have to do to improve its ratings next year. And why I'm not sure it's a good idea.


Richardson's FAST rating was four stars out of five. It was in the 97th percentile of all Texas school districts in showing academic progress in reading and math. That's right. RISD had "as much or more progress than 97% of Texas school districts." Clearly, academic achievement is not a barrier to achieving the highest FAST ranking.

But the "F" in FAST stands for "Financial" (and the "A" does not stand for "Academic".) Given that this rating is computed by the Texas Comptroller's Office, you can be sure that spending is given as much or more weight in the exercise. And on the spending measure, Richardson is only slightly better than average compared to its fiscal peers. It's on the low spending side of the scale, but not low enough to earn that fifth star.

And that's where I don't want to go. The RISD has the balance between academics and spending right. The RISD achieves a 97% academic rating with lower than average spending. That's excellent, even if the FAST only awards RISD four out of five stars. If earning that fifth star entails cutting costs to the point where academic achievement is lowered as well, that's a tradeoff that is bad for our kids. I'd rather have highly educated children than shiny awards from the Comptroller. Congratulations, RISD, you've got your priorities in order.

Email ThisBlogThis!Share to TwitterShare to FacebookShare to Pinterest
Labels: RISD
Newer Post Older Post Home
Title credit: "The Wheel's Still in Spin"
"Not Being Listened to Since 2006"
Reader Praise for "The Wheel"