After the jump, a single graph that Perry will have a hard time explaining.

The following graph is from a December, 2009, report by Public Citizen: "Liability Limits in Texas Fail to Curb Medical Costs." 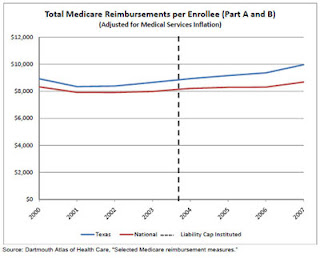 "The only improvement in Texas since 2003 has been a decline in doctors’ liability insurance premiums. But payments by liability insurers on behalf of doctors have dropped far more than doctors’ premiums. This suggests that insurers are pocketing more of the savings than they are passing to doctors. There is no evidence that any of the savings has been passed on to patients or taxpayers more generally."

"Insurers are pocketing more of the savings." Now, think of that statement and think of everything else you know of Rick Perry. Are you surprised? When Rick Perry runs for President and trots out tort reform as one of his accomplishments in Texas, look at that graph again. Who are you going to believe, Rick Perry or your own lyin' eyes?