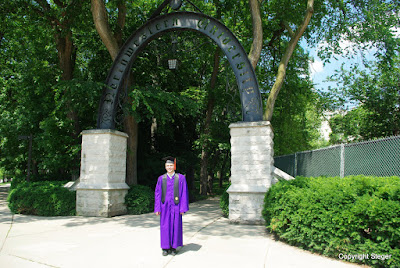 There has been no news from Richardson since last week because Ellen and I were in Evanston, Illinois, to attend Northwestern University's 152th commencement ceremony. John received his Bachelor of Science degrees in Industrial Engineering and in Manufacturing and Design Engineering.

The weekend's activities began with sightseeing around the Evanston area. First stop was the Baha'i House of Worship for North America, one of only seven Baha'i temples around the world. Next stop was the Evanston Art Center, the Grosse Point Light House, and the nearby beach. We then strolled Northwestern's beautiful campus, stretched out along the Lake Michigan lakeshore, a gem of a setting.

Commencement day began with a President's reception on the lawn of the Norris Center. The weather, like the day before, was sunny, hot and humid, at least until mid-afternoon when a line of fast-moving thunderstorms moved into the Chicago area. Commencement, an outdoor event scheduled for 6:00 pm at Ryan Field, was threatened when the skies opened up at 4:30 pm with torrential rain and hurricane-force winds. Trees were uprooted in nearby neighborhoods and some windows popped out of the downtown Chicago skyscrapers. But by 6:00 pm, the storm had passed and commencement went on as scheduled.

Convocation of the McCormick School of Engineering was held Saturday morning, at which diplomas were awarded. The weekend's festivities were capped off with John's friend Armand's graduation celebration hosted by his parents, in the Skyline Room of the Trump Tower in downtown Chicago. The spectacular view was outdone only by the hospitality of Armand's family. A fun time was had by all.